So, the past couple of months.

Short version:  I took a short story called “Debit” to a writers’ workshop in October 2011. The workshop was a fantastic experience, on so many levels.  While there, I received inspiring feedback from generous instructors and co-workshoppers. And I was given a task: turn the short story into a novel.  In 90 days. 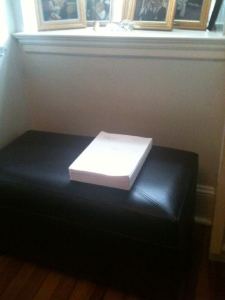 Until last winter, I was a prolific, lifelong story-starter.  I wrote beginnings, then edited and revised, in order to “get it perfect” before I continued to the end. The endings, of course, never materialized.

In part, this was a job-related issue: I love to write, and I’ve written for a living all my adult life. But – this is going to sound ridiculous – I rarely put my love of writing in the same room with writing for a living.  That is to say, I’ve written other people’s ideas down as articles and stories and catchy headlines for over a decade. When I had time, I worked on my own ideas. (See previous paragraph for how that went.)

So last year, I resolved to put my own writing first, to see what came of it.  And I resolved to finish a draft of a story, before I began revising.

What happened? I started finishing stories.  Some of them didn’t suck (especially after a round or ten of revisions).  And I began rebuilding my writing community, which I’d let go to pot over the course of more than a decade as a hired pen (and designer, and programmer), and several moves.

Then, in October, I grabbed a plastic lawn chair and sat down next to James MacDonald at Viable Paradise. We both eyed the copy of “Debit” that he held in his lap.  I was nervous, despite having participated in workshops before, mostly as a poet.   It was day 1 of the conference, I had a meeting with Elizabeth Bear the next day*, and a workshop critique on Friday – I was going to get a ton of feedback on this short story, starting now. What was Jim going to say?

He said, “this isn’t a short story.”  My worst nightmare.

My first thoughts were: wah-huh?  Um.  I can’t write a novel.  I’ve barely figured out how to finish a short story.

Instead, I think I mumbled, “wow.” This roughly translates in my secret language to “are you sure you don’t have me confused with someone else?” And then I listened while he outlined a mad plan for the next three months.

Somehow, on the very first day of the workshop, Jim had figured out a sure way to get me to do the impossible: he gave me a deadline, and he dared me to try.

I left that meeting with a map of the way forward.  I may have been in kind of a daze, because Jim had also encouraged me to talk to writers and editors who leave me tongue tied and shy on a good day, and he may have poured me a rather stiff drink.

I’m part Scot. My maternal clan’s motto is “in ardua tendit” (the family interprets this as ‘to attempt difficult things’, and Google translates: ‘tends to the arduous,’ which makes it sound like someone is gardening difficulties). In my case it usually means ‘leaps before looking.”

I’m also a typical freelance writer. Giving me a deadline is like waving a red cape and shouting ‘toro.’

Still.  A whole novel?  I spent the week chewing on the idea, and at the same time, I wrote a short story I wanted to finish.  Once I arrived home, I wrote another short story. I heard back from an editor asking for revisions on another story. I received a veritable blizzard of rejections on other stories I’d submitted. This wasn’t going well.  The short story ideas were calling and, while I spent a good chunk of my days making notes about character and plot for the novel, the end of October approached and I wasn’t focused.

So I took some steps:

There are a few details I left out.  Like the flailing.  And the emails I sent to friends (“I cannot believe how much this book sucks.” And their response: “It’s supposed to. Quit that and keep writing.” [Thanks, Amy]), and to Jim (“stranded at the mountain pass. have drunk the last of our water and eaten the horses”). The staring-out-of-windows, and the days where I sat down to write at 9:30 and looked up again to discover it was 4:30, I’d written 4,000 words, and I hadn’t eaten a thing.  That last part was pretty trippy, and rather cool.

Once I had a draft, I used Steven Gould’s iPad editing method for much of the revision process. I cut chapters, revised All The Scenes. Exorcised a number of really bad habits. Decided that the next thing I wrote would be in a completely different voice. Flailed some more. I read through the draft out loud, expunging what I stumbled over, until I couldn’t read any more.

Then I printed a hard copy.  It was tough to actually print out a physical copy of the draft.  It was a very important thing to do, especially when so much is done digitally these days, because I hadn’t weighed in my hands the physical fact of how much I’d written until I printed and boxed the thing.  Plus, I found several hideous typos in the first couple pages. Which I fixed. Then,

What happens to the draft now?  I’m not quite sure.  I like the story.  I hope others do.  I know this is the first stage, and there will be more work to come. Best answer right now is: I’ll keep you posted.

The package hasn’t reached its destination yet. In the meantime, I received another message from Jim.

It said, “Start another novel. Today.”

Visit me on Patreon and see what you're missing. Support me for extra content, Q&As, random surprises, and sneak peeks behind the scenes for what's coming next!
Join 17,098 other followers