Their Words, Her Test Kitchen: Cooking the Books with Chelsea Monroe-Cassel 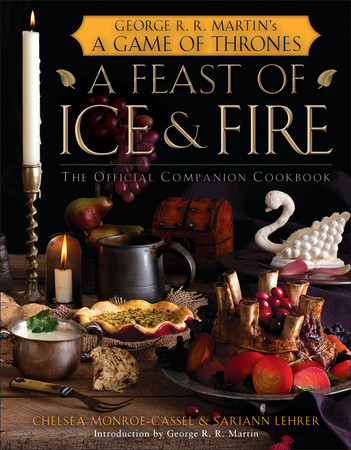 Chelsea Monroe-Cassel, with friend Sariann Lerher, taught herself to cook in order to make the dishes in George R.R. Martin’s Song of Ice and Fire. Before long, they were posting their progress online, at The Inn at the Crossroads, and found themselves with a cookbook deal, and a forward by GRRM himself.

Chelsea’s branched out since then, with Food Through the Pages.  There, she recreates fictional food from many authors, including Saladin Ahmed, Scott Lynch, Steven Brust, Suzanne Collins, and J.R.R Tolkien.

Chelsea dropped by Cooking the Books, bearing tasty treats and answers to our many questions.

Have you come across foods that you can’t recreate? Which ones? Is that due to lack of ingredients or something else?

For the most part, the great sounding foods I’ve come across in books is based in some amount of reality. That said, there are a few things that are trickier than others.

On Inn at the Crossroads, I’m down to mostly salads and foods that I can’t make. Many of the stranger ingredients are either illegal in the US (horse, heron) or too expensive/elusive (swan, camel, etc).
For Food Through the Pages: I’m still trying to figure out how to make tulip blossoms out of candied orange peel (Gentlemen Bastards series), and Ailette de Bodard’s series has things like cactus worms and fried frogs. Probably not too high on the list, although the maize-thickened drinking chocolate sounds wonderful! The advantage there is that I can pick and choose dishes that sound good from any series I like. Some of the historical recipes I try are also problematic, sometimes consisting simply of an ancestor’s scrawled list of ingredients, and nothing else! Still, figuring out how the dish was meant to be cooked, and then enjoying the finished dish, is incredibly rewarding.

What fantasy food would you like to see in a story?

I’m always a fan of desserts. My favorites are probably the showpieces: sugar skulls filled with fruity custard, cake in the shape of a giant palace, etc.

Oh, both! I think each has its place in a story, and in a kitchen, too. Look at the Hunger Games, for example- readers experience the luxury of the Capitol through the frothy pink soups, compared with the harsh conditions of the Arena.

I love quest food. It’s usually the everyday comfort fare at home, like cheese, jerky, fruit, and the occasional roast meat. Somewhat ironically, it’s probably pretty close to the Paleo diet that’s become so popular. Hunting mammoths must not have been that substantially different from hunting dragons, in terms of cuisine.

What is the craziest thing you’ve recreated?  The best-tasting?

Craziest would have to be the honey-spiced locusts from Dance with Dragons. I’d never eaten a bug before, and had some reservations about it. But, in the end, they were fried in butter before getting a coat of honey and spices, so they were pretty tasty. Other crazy creations include the Ginger Scald from Scott Lynch’s Gentlemen Bastards series (a lot of research into those cocktail ingredients, and how to mix properly), and the (still) forthcoming Sugar Skulls filled with Custard.

I’ve been almost universally surprised by how much I’ve enjoyed the medieval dishes. A lot of us have a very specific idea about medieval food, that it’s bland, or overseasoned to mask bad tastes. I haven’t found any of that to be true. It has some elements in common with Victorian cuisine, in that very little was ever wasted. The flavor profiles are often different from what our modern tastebuds are used to, combining sweet elements with meat dishes and so on. My favorites are mostly desserts (sense a trend?): Medieval Arya’s Tarts, from the cookbook, and medieval Spiced Plum Mousse, from the blog. Another new favorite involves poaching eggs in a meaty gravy, c. 1655. Delicious!

Would you talk a bit about social media, your photography skills (seriously, your photos make me want to write something that you’ll want to cook), and how much work goes into each post?

I really learned everything I know about this process on the fly. I never expected the blog to take of like it has, or to be the author of a cookbook! The photography in the very beginning was pretty sorry stuff, very dark, shot quickly, and then eaten. As time went on, I realized that to some extent, at least until we learn to Willy Wonka food through computers, a food blog is only as good as its photos. Readers can’t taste the dish, or smell it baking, so they have to rely on descriptions and images. I studied other blogs, and took a LOT of photos. For each photo that makes it onto the blog, I have usually taken 20 or more that are never used. Some recipes work well the first time, and are photogenic, while I’ve made others 5 times or more until it’s right. Everything in Feast was tested multiple times for measurements, and to get the best photo possible. Doing all the photography myself also means that I’m constantly on the lookout for new dishes, silverware, serving vessels, glasses, and props to use in the photo setups.

As far as social media, I had to learn pretty much all of that from scratch, too. I had never used Twitter, so had to learn all the unspoken etiquette that goes with it. Although the whole adventure has felt like an uphill struggle for much of the time, I feel now like I’m nearing the top of the learning curve. There are always new things I can learn, but the hardest part is past. Now the trickiest part is juggling three blogs along with all my other projects!

Thanks so much to Chelsea for visiting Cooking the Books!

In lieu of one recipe, we’re linking you to many recipes this time.  First, a list of Food through the Pages recipes broken out by period, genre, and author.
Next, a veritable smorgasbord:
_____

Author, artist, and designer Chelsea Monroe-Cassel researches and translates historical recipes with the special kind of geeky enthusiasm unique to former classics majors.  Food through the Pages and The Inn at the Crossroads both contain the wealth of her experiments, along with co-chef Sariann. The pair’s first cookbook, A Feast of Ice and Fire, with a forward from George R.R. Martin, is available from Random House.
Read more Cooking the Books – The updated library of interviews is here.