Michael J. Martinez is the author of the Daedelus Trilogy, as well as MJ-12 Inception, which I have an early copy of, since I’ve had the pleasure of hanging out with Michael at Dragoncon this week!

I have to head to a panel soon, so I’m going to let Michael take it from here — enjoy!

When it comes to writing, I’m a big fan of making sure the setting is as much a character as the actual characters. A great setting, whether fantastical or mundane, gives the writer a ton of great hooks upon which to hang plots and develop characters.

I write historical fantasy, and I pay attention to how the time period flavors the voice of the piece. I’m big on voice, and whether I’m writing in the late 1700s or the late 1940s, I try to make that voice resonate not just with characters, but within the narrative as well. I read letters and books written by people who lived during that time. For my latest novel, radio and movies informed a lot of voice as well.

Then there’s the music and art of the period, the political and social views, and yes, there’s the food, too. I thoroughly researched the state of American barbecue in the late 1940s just so I could have those elements handy for a single scene, and then only to give a couple characters a bit of seasoning.

This latter bit was not hardship for me; I love barbecue. When we moved into our first house, my wife gave me a barrel smoker as a housewarming present. I’ve set wood fires at 6 a.m. just to have well-smoked brisket by 8 p.m.

My barbecue sauce, adapted from a half-dozen different recipes over five-plus years, is my pride and joy. You don’t have to spend 14 hours smoking a brisket to enjoy it, though. That’s just me. On the bright side, you can get a lot of writing done while tending to the fire.

Heat the oil in a saucepan on medium heat. Add the onion, ginger, garlic, cayenne and black pepper, and saute until the onion is translucent. Add the cider vinegar, tomato paste, soy sauce, sesame oil, syrup and mustard. Turn the heat down as low as you can and simmer for at least 45 minutes. Strain the remaining solids from the sauce. (Alternately, you can puree the sauce with a stick blender if you like onions a lot, but be careful – it’s hot!) Continue to simmer until you’re ready to serve. 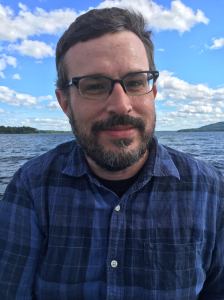 Michael J. Martinez is the author of MJ-12: Inception, the first in a series of paranormal Cold War spy thrillers from Night Shade Books, coming out in Hardcover in September. He’s also the author of the Daedalus trilogy of Napoleonic Era space opera novels and assorted bits of short fiction. He lives in New Jersey with his amazing wife, fantastic daughter, two cats and three chickens. You can find him online at http://www.michaeljmartinez.net and on Twitter at @mikemartinez72.