I was lucky enough to read Lara Elena Donnelly’s first novel, Amberlough, this summer – and this is what I had to say:

“Intrigue and passions intertwine in Amberlough — A city on the edge of political upheaval, glittering with decadence and riddled with spies! Be careful or you too will be lost in the whirl of the kind of glamour familiar in 1930s Shanghai or Weimar-era Berlin. Donnelley’s debut is powerfully seductive and wrenching.”

In addition to the glamour and decadence, Amberlough is also *delicious.* Lara has joined us today to talk about why… and to bring a recipe from The Culture Club dining series, created for Amberlough. Everyone slide up to the Amberlough table for Lara…. welcome!

In addition to a writer, I have always been a cook. So it makes sense that the sybaritic pleasures have a prominent place in my fiction. Amberlough is no exception.

Amberlough City is a cosmopolitan melting pot, full of tasty-sounding snacks, some of which I constructed completely from imagination. And when you invent a food from whole cloth, there’s no existing recipe. You can’t just whip up a batch of Hyrosian pumpernickel buns, no matter how delicious they sound.

Unless, of course, you’re Sunshine Flagg.

I met Sunshine while we were both living in Louisville, Kentucky. She’s a long-time restaurateur, giant nerd, and excellent friend. When I asked her to help me realize some of these fantastical recipes, she brought Amberlinian food off the page and onto the table.

When I first asked for her help, we had some back and forth about what I was trying to evoke with the food. She suggested an Asian treatment for a stuffed lobster tail dish, but in the book, its served in a stuffy, western-style lunch spot—think Claridge’s. Water chestnuts and shrimp paste would be more at home in Chapter Eighteen, at the noodle shop where a fence and a smuggler meet to do a deal.

Eventually we settled on a menu, which Sunshine served as a part of her international dining series, The Culture Club. Last November, I was lucky enough to attend The Culture Club Presents: A Sneak Peek Into the World of Amberlough.

The food—paired with readings from the book—consisted of a celery-cucumber mocktail, pumpernickel buns, eel-stuffed barley fritters, sweet and spicy pork skewers, and shirred eggs: a good survey of the diverse foodstuffs available to denizens of Amberlough city.

Whisk with a fork and cook starter on medium-low until combined and warm. Take it off the heat and stir in molasses, cocoa powder, oil water and egg. Mix the wet into the dry until fully combined. Let this mix rest for 20 minutes.

Knead dough on a well-floured board until it is elastic and slightly sticky. Place in a lightly floured bowl and cover with a tea towel. Let the dough rise in a warm place for 2-3 hours until the volume of the dough has doubled.

When the dough has risen make the caramel before moving on to the next step with the dough.

Cook the sugar on medium-high until it starts to liquefy, darken and bubble. Do not stir. Swirl the pan gently to evenly cook the caramel. When the caramel is fully liquid and brown, take off the heat and add butter. Swirl the pan until the butter is incorporated. You may have to put it back on the heat for a minute. Once incorporated add water, honey and caraway seed. Mix until combined. Stir in the salt. Transfer caramel to the cake pan.

Spread dough out into a rectangle approximately 3/4 of an inch thick. Spread filling evenly over rectangle leaving 1/2 an inch clear at all edges. Sprinkle pistachios evenly over the filling.

Roll the rectangle of filled dough starting from one of the narrow ends toward the other. Once it’s fully rolled turn the log so that the seam is facing down. Slice 3″ sections and arrange in a 9″ cake pan. Let the buns rise for 20-30 minutes until puffy and beautiful.

Bake at 350F for 15 minutes or until the center of the dough reads at 188F with an instant-read thermometer. When done immediately turn out onto a plate to cool. 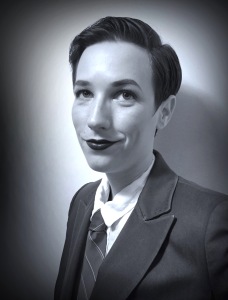 The all-singing, all-dancing Lara Elena Donnelly is a graduate of the Alpha and Clarion writers’ workshops. Her work has appeared in venues including Strange Horizons, Escape Pod, Nightmare, and Mythic Delirium. Her debut novel, vintage-glam spy thriller Amberlough, drops on February 7, 2017 from Tor Books. A veteran of small town Ohio and the Derby City, Lara now lives in Manhattan. You can also find her online at @larazontally or laradonnelly.com.

(Many thanks to Kathryn Martin who helped with this post!)

Fran Wilde’s novels and short stories have been finalists for six Nebula Awards, a World Fantasy Award, a Lodestar and three Hugo Awards, and include her Best of NPR 2019, Nebula-winning Middle Grade debut, Riverland (available now, complete with two starred reviews!), her new gemworld novella, The Fire Opal Mechanism, also available now! her Andre Norton- and Compton-Crook-winning debut novel Updraft, its sequels Cloudbound, and Horizon, and theNebula-, Hugo-, and Locus-nominated novelette The Jewel and Her Lapidary. Her short stories appear in Asimov’s, Tor.com, Beneath Ceaseless Skies, Shimmer, Nature, and the 2017 Year’s Best Dark Fantasy and Horror. (Bibliography.) She writes for publications including The Washington Post, Tor.com, Clarkesworld, iO9.com, and GeekMom.com.

Like what you see here? There’s a lot more…

Visit me on Patreon & see what you’re missing. Support me for extra content, Q&As, random surprises, and sneak peeks behind the scenes for what’s coming next!