I’ve been thinking a lot about maps lately: their stated purposes, their politics, and their alternate uses. Maybe it’s because of all the travel, maybe it’s because I’m setting new goals for myself. But the truth is that I’ve always loved maps – old and new. I’ve especially loved how a map can define the known and unknown, point out regions I wants to visit (real and imaginary), and mark places I’ve been.

I made an author’s map for Updraft a few years ago and used the sketch as part of the bookplates for Updraft. It’s not glorious, but it did the trick of helping me figure out and remember which towers were which, and where the winds went. I’ve made another for Cloudbound. 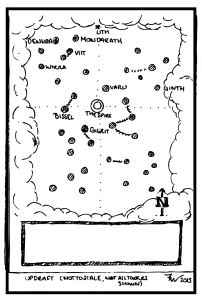 When we moved, almost nine years ago now, I found myself looking at maps a lot — for finding how to get from point A to point B in my new city, sure, but also at maps and charts from home, for remembering how deep the harbor was beneath the dock closest to our rowhouse, measuring the walking distance from my home to my friends’ homes before we moved, and measuring it again now, as driving distance.

Where I live now (in a big orange you-are-here dot on my mental map), if I walk a bit in a straight line marked by a  large road, no turns – I can get to The Philadelphia Print Shop pretty easily. Their drawers and shelves hide old, beautiful maps of regions all over the world. Beautifully hand-tinted maps from the 1600s and 1700s hang, very unaffordably, on the walls. I love to visit. Sometimes I find a tiny map that has a piece of my new (still new, always new, even after nearly a decade, new) city. Other times, I find maps of places that no longer exist, except on paper.  Once or twice, I’ve found a map with a dragon on it, or an elaborate compass rose, or a place that looks like nothing else in the accepted “this is what the world looks like” maps that encompass all of my you-are-here. I love those especially.

One day, I’ll buy one of those maps to keep for myself, but right now, they’re in the drawers up in the shop — if you visit, you can find them for yourself too. 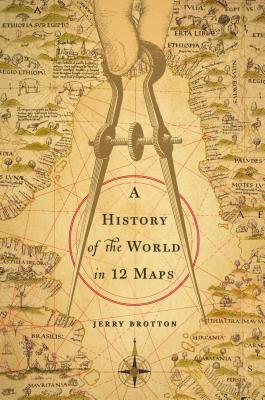 I hadn’t told anyone I’d been thinking about maps so much, though I know maps have crept into my writing lately, as much as songs and games seem to do. They’ve crept into my reading as well. I have Jeremy Broughton’s A History of the World in 12 Maps on my nightstand, and a large atlas of atlases from ancient eras through the present, that I received over the holidays. More than that, when our water heater went nuts (seriously, the fire department came and marked it with a big “Condemned” sticker – thank goodness for our CO monitor, which likely saved our lives), this winter, I dealt with the stress by making map necklaces and bookmarks for a few special friends and family.

To my delight and surprise, my family gave me maps as well for the holidays — the atlas of atlases, as well as a beautiful nautical chart scarf. A friend wrapped a package in a topographical map.

I couldn’t ignore the signs. 2016 was showing all the characteristics of becoming a map year. So I’ve set out to map places I want to go in my writing — things I want to strengthen, areas I didn’t know existed because I’d never stopped to look.

I do this a little bit every year — spending January noodling with writing exercises and re-reading books on writing — it’s a way to get back into shape (or back on the map if we’re sticking with the [cough — already fairly extended] metaphor) after a lot of off-the-grid writing behavior toward the end of the year (thx, deadlines!). Sometimes I take a class. It’s worth it, purely for the feeling of getting back on the map, and especially for learning new things.

This January, I took a course I’d wanted to take for a while — Nisi Shawl and K. Tempest Bradford‘s Writing the Other Intensive. The course, and the opportunity to talk with and explore ideas with my classmates and the fantastic instructors, was well worth it in every respect, and helped me reaffirm that always reaching to do better, reaching out to others for guidance, and seeing more from different perspectives beyond one’s own comfort zone, is an important part of writing. At the same time, the course offered so much reading that expanded the map I walk every day, I am incredibly grateful. I want to continue exploring new territory, no matter what, and doing it with respect.

Because that’s the other part of maps — in defining a territory, using lines and markers, things (small things sometimes, large things sometimes) get left out or smoothed over, or elided for Reasons that a map reader many years on will never know about. Maps codify a point in time and in doing so, make official one version of a place that stands until someone else comes along to make a new map.

So this year, I’m hoping to engage a lot of maps, and look under them and through them, to challenge my assumptions about them, and to question why this map is the ‘right’ map, and not that one. I may not do it perfectly, I may miss opportunities, and I’ll very likely draw some lines that will need redefined by others down the road. But I’m going to try.

At the same time, I’m hoping to make a map of where I want my writing to go from here — a map that will absolutely change as time goes on, and will deepen with the unexpected — a map that’s more of a starting point and a set of non-linear goals at different elevations.

Because, for me (as always, YMMV), this map year is about the unexpected in combination with the planned route. It’s about reflecting on the plan, and looking back at the path afterward, and making more of a plan. It’s about defining spaces that aren’t on the map, and finding places that have been hidden away. It’s about challenging myself to try new things, always, and make new maps.

So, onwards.
Hope I see you on the road.