This fall has been a blur. I’m very grateful for the opportunity to see so many of you on the road (there was a lot of road!). Now that the northeast is turning cold, I’m hibernating for a bit — resting, writing, recombobulating, and recuperating. I’m actually trying to mostly stay off social media (with the exception of some photos & sketches now and then) through the holidays.

So I’ve got reading suggestions for you early – both mine and others. Whether you’re a SFWA member or not, you should absolutely check out the recommended Nebula reading list for many more than I can list here. Same goes for the Hugo Spreadsheet, organized by Renay, and the Hugo wiki here. And A.C. Wise’s What Have You Done & Loved Lists.

After those, you’ll find links to things I’m particularly grateful for the opportunity to have been able to do this year.

Some * Great Reads from this Year (*Note: VERY INCOMPLETE … with a bigger, still incomplete list here):

(And, because I can’t resist, Coming Very Soon, You will love these):
– Witchmark, C.L. Polk
– The Only Harmless Great Thing, Bo Bolander)

Novellas
The Murderbot Diaries, Martha Wells
Passing Strange, Ellen Klages
And Then There Were (N-One), Sarah Pinsker
A Portrait in the Desert of Personages of Power, Rose Lemberg
Red Threads of Fortune & Black Tides of Heaven, JY Yang

Novellettes, Stories & Poems
A Place to Grow, A.T. Greenblatt, (Beneath Ceaseless Skies) : “Lillian was wearing one of her uncles’ old suits again. Her family always wore suits when they were going to tear down a world.”

Children of Thorns, Children of Water Aliette de Bodard (Uncanny) “It was a large, magnificent room with intricate patterns of ivy branches on the tiles, and a large mirror above a marble fireplace, the mantlepiece crammed with curios from delicate silver bowls to Chinese blue-and-white porcelain figures: a clear statement of casual power, to leave so many riches where everyone could grab them.” (novelette)

Waiting on a Bright Moon, JY Yang (Tor.com) : “The body arrives during the second refrain. It slaps on the receiving dial with the wet sound of rendered flesh, and the processing officer, a young woman fresh from the originworld, screams.”

Crows’ Eye, Sarah Hollowell (Fireside): “Ruby doesn’t like the lake.
Everyone else likes it fine, including her sister, Dip. It’s her favorite part of their property. When they were kids, she told Ruby it was actually the eye of an ancient, enormous crow, and that one day it would wake, shake their house and the forest off its back, and fly away….”

After Burning, Wren Wallis (Beneath Ceaseless Skies) : “It’s impossible to keep a secret from the Sons, of course, and so Almas is wearily unsurprised when the black huntsmen arrive on the second day….”

Can’t Beat ‘Em, Nalo Hopkinson (Uncanny): ““Yeah, that’s some clog,” the plumber said. She pulled the metal–and–rubber snake out of the bathroom sink. Marisella wrinkled her nose at the gunk sticking to it. Whatever it had caught on in her drain had warped the metal and torn away bits of the rubber.”

Excerpts from a Film, A.C. Wise (Tor.com) “Alone in his office George Harwood watches the dailies. She’s there in the background. After so long, he almost dismisses it as a trick of his imagination, or maybe the Laphroaig at his elbow, ice warming and cracking in the glass. But no, she’s there, his Mary.”

Caligo Lane, Ellen Klages (a reprint, breaks my heart every time – at Tor.com) “Even with the Golden Gate newly bridged and the ugly hulks of battleships lining the bay, San Francisco is well-suited to magic. It is not a geometric city, but full of hidden alleys and twisted lanes. Formed by hills and surrounded by water, its weather transforms its geography, a fog that erases landmarks, cloaking and enclosing as the rest of the world disappears.”

The Ache of Home, Maurice Broaddus (Uncanny) “The Indy Metro bus came to a shuddering halt and deposited Celeste Burroughs at her stop. A plastic shelter enclosed a bench printed with the words “Embrace Mortality.” Celeste looped the cord of her earbuds around her thumb then unwound it, careful not to pull the cord free from her pocket, where it trailed, not plugged into any device. Listening to music in public violated her sense of personal boundaries. The inserted earbuds were her shield against the catcalls and unwanted attempts at conversation both on the bus and on her walk home.”

Mix Tapes from Dead Boys, E. Catherine Tobler (Lightspeed) “The derelict hangs in Neptune’s blue orbit, a chip of shadowy flint from a distance. Up close, it’s old and rusting, myriad old systems cobbled together, and Hadley swallows her nervous and exhilarated heart a dozen times as she latches the pod to its belly, makes a hard seal at the airlock, and geckos her team inside. ”

A Nest of Ghosts, a House of Birds, Kat Howard (Uncanny) “The letter from my grandmother arrived twenty years after she died. It—and its contents—were completely unexpected.” 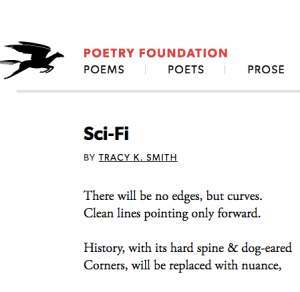 Small Changes Over Large Periods of Time, K.M. Szparza (Uncanny) “I’m trying to piss against a wall when the vampire bites me. Trying because drunk-me can barely hold a glass,…” (adult, novelette)

Read Before Use, Chinelo Onwualu (Uncanny) “The basement of Satellite City’s main library was made up of several levels dug deep into the earth. Even this early, several hours before dawn, each level was filled with scholars poring over old documents, students fetching and carrying, and stewards and handmaids scurrying about. Alia flashed her cartouche at the attendant on duty and wound her way down the wide stairs to the level where one of the most extensive collections of pre-Catastrophe literature in the land was housed.”

The White-Throated Transmigrant, E. Lily Yu (Tor.com) “On a grim Tuesday in November, when the world seemed empty of mystery and magic, indeed, empty of all beauty, Winona Li drove down the two-lane country road that counted for a highway in this area, heading home from a second interview. The copper sting of failure sat on her tongue. At the midpoint of a wood whose laced branches cast gloom upon the road, a small, quick thing fluttered across the windshield of her Impala, thumped the glass, and fell.”

Shape without Form, Shade without Color, Sunny Moraine (Tor.com) “Starlings whisper from the bamboo.
Sometimes sense emerges. It’s nothing but pattern recognition run amok, nothing but old instinct performing where it’s no longer needed, but the experience is pleasurable. If you stand in the driveway at dusk and remain silent, let it settle around you like a gray blanket, then make a single small movement, the sound explodes. They are easily startled. More, they hiss warnings to each other with their wings. They too are governed by instinct. When they come they mark the last days of fall and the first of winter. They do not arrive but with the cold; they bring the chill with them, clinging to their feathers.”

Links to things I’m particularly grateful to have been able to do this year (aka things by me):
Essays:

Invisible 3 – This collection of essays about representation in science fiction and fantasy contains work by Rebecca Roanhorse, Jennifer Cross, me, and more. Edited by Jim Hines and Mary Anne Mohanraj, with an introduction by K. Tempest Bradford, it’s Hugo-eligible in the related works category, and available for purchase.  (Proceeds go to Con-or-Bust)

Other essays include – Interstellar Poet Laureate; The Art of the Bone Universe; The Invisible Engineer; How to Make a Monster

“A Recipe For Magic” with Kat Howard, B&N Blog, November 2017
“… The sugar magic smelled like blueberries, cast so that when the petals of the iris were broken, each would sing a line of verse. She placed the flower with the others, in a garden of white icing.”

“Clearly Lettered in a Mostly Steady Hand” Uncanny Magazine, September 2017 (interview | podcast | story)
“Entrance
There’s a ticket booth on my tongue.
Don’t look in my eyes, don’t plead curiosity, you won’t get anywhere with that. Try it and you’ll see your reflection in my sea-green gaze: your shadow sprinting through the heavy glass doors. You’ll smell a whiff of brine, perhaps something more volatile. You’ll be caught and held, while your likeness departs. You don’t want that.
No one wants to be pinned between an entrance and an exit, unless you’re part of the show. (read  more)”

“Regarding Your Future with the Futures Planning Consortium,” with Raq Winchester, Fireside Fiction April 2017

“… As a result of this error, the rise of fascism in Europe has accelerated, the next global extinction launched without supervision, and the party caterers were sent to 1620 BCE. (read more)”

“Happenstance,” Futurescapes: Cities of Empowerment Anthology 2017
“Sunlight hits the top floor of One Eastwaters Tower in a hard, bright wave. When the afternoon glow also strikes the lake, everything turns to dazzle.I’ve lived high-lakeside for three years. I still startle at the ripple of water-light on the floor, dappling my skin, sparking off the bits of my exoskel that are otherwise invisible no matter what I’m wearing.”

Serial Box: The Witch Who Came in From The Cold, guest episode 6
Witchcraft and tradecraft in cold-war era Prague. What could possibly go wrong? Everything.

A city of living bone towers crumbles to the ground and danger surrounds. Kirit Densira has lost everything she loved the most―her mother, her home, and the skies above. Nat Brokenwings―once Kirit’s brother long before the rebellion tore them apart―is still trying to save his family in the face of catastrophe. In this conclusion to the Bone Universe trilogy, they will need to band together once more to ensure not just own survival, but that of their entire community.  Welcome to a world of wind & wonder, sky & ground, heart & hope.

Fran Wilde’s novels and short stories have been finalists for three Nebula Awards, a World Fantasy Award, and two Hugo Awards, and include her 2019 Middle Grade debut, Riverland (available now, complete with two starred reviews!), her new gemworld novella, The Fire Opal Mechanism, also available now! her Andre Norton- and Compton-Crook-winning debut novel Updraft, its sequels Cloudbound, and Horizon, and theNebula-, Hugo-, and Locus-nominated novelette The Jewel and Her Lapidary. Her short stories appear in Asimov’s, Tor.com, Beneath Ceaseless Skies, Shimmer, Nature, and the 2017 Year’s Best Dark Fantasy and Horror. (Bibliography.) She writes for publications including The Washington Post, Tor.com, Clarkesworld, iO9.com, and GeekMom.com.

Like what you see here? There’s a lot more…

Visit me on Patreon & see what you’re missing. Support me for extra content, Q&As, random surprises, and sneak peeks behind the scenes for what’s coming next!